In the late 1600s, while sailing to Port Royal, Jamaica, aboard HMS Dauntless, Governor Weatherby Swann, his daughter Elizabeth, Joshamee Gibbs, and Lieutenant James Norrington encounter a shipwreck and recover a boy, Will Turner. Elizabeth discovers a golden pirate medallion around his neck, and keeps it in order to protect him.

Eight years later, Norrington is promoted to commodore and proposes to Elizabeth. Her corset makes her faint and fall into the sea, which causes her medallion to emit a pulse. Captain Jack Sparrow, who had just arrived in Port Royal to commandeer a ship, rescues Elizabeth. Norrington identifies Jack as a pirate, and a chase ensues. Jack encounters Will, now a blacksmith and swordsman. They duel, and Jack is captured and imprisoned. That night, the Black Pearl attacks Port Royal in search of the medallion. The crew of the Pearl capture Elizabeth, taking her to meet Captain Barbossa. Elizabeth claims her last name is Turner to conceal her identity as the governor’s daughter. She learns that her medallion is one of 882 gold pieces that Barbossa’s crew took from a treasure of Hernán Cortés on Isla de Muerta. An Aztec curse condemns them to become undead corpses under moonlight and with immortality but unable to enjoy anything, until they return all of the pieces and atone in blood, with the medallion being the final piece. Barbossa takes her prisoner, believing her to be the daughter of William “Bootstrap Bill” Turner, whose blood is needed to lift the curse.

Will frees Jack to rescue Elizabeth, whom Will loves. Jack—the original captain of the Black Pearl before Barbossa staged a mutiny—gets assistance from Will to reclaim his ship. The two commandeer HMS Interceptor, a small and very fast sloop-of-war, and head for Tortuga. There, Jack enlists Gibbs to help them put together a crew. At Isla de Muerta, Will and Jack witness Barbossa sacrificing Elizabeth’s blood and the final gold piece. The curse is not lifted because Elizabeth does not carry the blood of Bootstrap Bill Turner. Bootstrap had been a crewmate of the Black Pearl before being thrown overboard by the crew for giving the medallion to Will. Will rescues Elizabeth and brings her to Interceptor, while Jack is captured by Barbossa and gets locked in the brig of the Pearl. The Black Pearl pursues the Interceptor, taking Jack’s crew hostage and destroying the ship. Will makes a deal with Barbossa to release Elizabeth in exchange for his blood, but Barbossa exploits a loophole in the agreement, marooning Jack and Elizabeth on a nearby island. Elizabeth makes a smoke signal, and Norrington brings HMS Dauntless, a ship of the line, to rescue Elizabeth and arrest Jack. Elizabeth asks Norrington to return for Will, convincing him by accepting Norrington’s marriage proposal.

That night, the Dauntless arrives at Isla de Muerta. Jack plans to lure the pirates out to be ambushed by the crew of the Dauntless, but the plan goes awry when Barbossa’s crew covertly walks underwater to surprise-attack the Dauntless from below. Elizabeth escapes the Dauntless and frees Jack’s crew from the brig of the Black Pearl. They refuse to rescue Jack and Will, so Elizabeth sets out on her own while Jack’s crew departs aboard the Pearl. Jack frees Will and duels Barbossa, while Elizabeth and Will fight off Barbossa’s crewmen Weatherby, Monk and Jacoby. Barbossa stabs Jack in the stomach, but the latter is revealed to be under the Aztec curse, having secretly taken a piece of gold from the chest of Cortés. Jack then shoots Barbossa, and Will drops both coins into the chest, with his and Jack’s blood on them. The curse is lifted, causing Barbossa to die from Jack’s gunshot; the rest of Barbossa’s crew, realizing that they are no longer immortal, surrender and are arrested by the Royal Navy.

At Port Royal, Jack is led to the gallows to be hanged for piracy. Elizabeth diverts Norrington’s attention and Will attempts a rescue, but Jack and Will are surrounded and held at gunpoint. Elizabeth intercedes and declares her love for Will, leaving Norrington crestfallen. Governor Swann pardons Will and gives his blessing for Elizabeth to marry him. Jack dives into the sea and escapes aboard the nearby Black Pearl, finally reclaiming the ship. Norrington permits Jack and the Pearl “one day’s head start” before initiating pursuit. 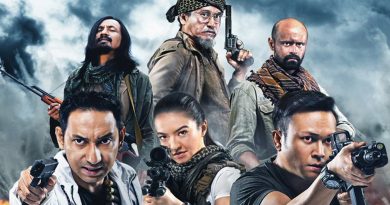